Silicon is the most abundant solid element on earth, being second only to oxygen and it makes up more than 25% of the earth’s crust. However, it rarely occurs in elemental form, virtually all of it is existing as compounds.

In this lecture the question will be answered how very pure sand (SiO2) is converted into mono-crystalline silicon and later on into silicon detectors. After a description of the different growth techniques for mono-crystalline silicon with special interest in the material used in this work it is shown which kind of detectors have been used and how they have been produced.

The material requirements for the manufacturing of silicon particle detectors used for high energy physics applications have to meet two basic demands: high resistivity and high minority carrier lifetime. A very high resistivity (> l Kohm/cm) is needed in order to fully deplete the detector bulk with a thickness of about 200 - 300 um by an adequate voltage below about 300 V.

Together with the demand for a reasonable price and a homogeneous resistivity distribution, not only over a single wafer but also over the whole ingot, Float Zone silicon is the best choice of material and is therefore exclusively used for detector applications today. Further requirements for detector grade silicon are often a high minority carrier lifetime and a very low bulk generation current  in order to avoid detector noise.

However, these requirements should not be taken too strictly for particle detectors that will be exposed to severe radiation levels since already after small radiation fluences the lifetimes are reduced by orders of magnitude and therefore the good initial lifetime qualities are of no use any more.

In the search for radiation harder material and in order to perform radiation tests on an as wide as possible range of material also silicon grown by the Czochralski has been investigated in this lecture.

While for the epitaxial technique the price and the substrate problem might rule out largely its application as detector material the Czochralski method could become of interest for the production of radiation hard material if it is possible to make high resistivity (> 1 KOhm/cm) CZ commercially available.

In this section the production of silicon with the two growth techniques mentioned above will shortly be reviewed with special interest in the high resistivity silicon production and the possibilities of defect engineering respectively the controlled incorporation of impurities into the crystal.

New Czochralski process on silicon and the bright future of graphene

The vast majority of the commercially grown silicon is Czochralski silicon due to the better resistance of  the wafers to thermal stress, the speed of production, the low cost and the high oxygen concentration that offers the possibility of Internal Gettering. The industrial standard crystals range in diameter from 75 to 200 mm, are typically l m long and of < 100> orientation. In the following  a short review is given.

The Czochralski method is named after J. Czochralski, who determined the crystallisation velocity of metals by pulling mono- and polycrystals against gravity out of a melt which is held in a crucible. The pull-from-melt method widely employed today was developed by Teal and Little in 1950 . A schematic diagram of a Czochralski-Si grower, called puller, is shown in Fig. 2.1. The puller consists of three main components:

The Czochralski method begins by melting high purity polysilicon (SGS) with additional dopants as required for the final resistivity in the rotating quartz crucible. A single crystal silicon seed is placed on the surface and gradually drawn upwards while simultaneously being rotated.

This draws the molten silicon after it which solidifies into a continuous crystal extending from the seed. Temperature and pulling speed are adjusted to first neck the crystal diameter down to several millimetres, which eliminates dislocations generated by the seed/melt contact shock, and then to widen the crystal to full diameter.

During the production process the quartz crucible (SiO2) gradually dissolves, releasing large quantities of oxygen into the melt. More than 99% of this is lost as SiO gas from the molten surface, but the rest stays in the melt and can dissolve into the single crystal silicon.

Another impurity, however with smaller concentrations, that is also introduced into the melt by the production process itself is carbon. The silicon monoxide evaporating from the melt surface interacts with the hot graphite susceptor and forms carbon monoxide that re-enters the melt.

Oxygen is always the impurity with the highest concentration in CZ silicon. Typical oxygen and carbon concentrations are [O] ≈ 5 - 10 10^17cm-3  and [C] ≈ 5 - 10 10^15cm-3, respectively. The solubility of O in Si is ≈ 10^18 cm-3 at the melting point but drops by several orders of magnitude at room temperature, hence there is a driving force for oxygen precipitation. Furthermore the high oxygen concentration can lead to the formation of unwanted electrically active defects.

These are oxygen related thermal double donors (TDD) and shallow thermal donors (STD) which can seriously change the resistivity of the material. However, oxygen has also good properties.

Oxygen acts as a gettering agent for trace metal impurities in the crystal (Internal Gettering) and it can pin dislocations which greatly strengthens the crystal. Oxygen precipitates in the wafer core suppress stacking faults, and oxygen makes the Si more resistant to thermal stress during processing. This is the reason why CZ-Si is used for integrated circuit production, where there are many thermal processing steps.

However, the most important property of a high oxygen concentration from the point of view of this work is the improved radiation hardness. The main problem for the application as detector grade material arises from the resistivity of CZ silicon. Due to contamination with boron, phosphorus and aluminum from the dissolving quartz Crucible the highest commercially available resistivity is about l00 Ohmcm for n-type and only slightly higher for p-type material.

Therefore standard CZ silicon is not suitable for detector production.

However, first experiments to compensate the natural p-type background doping by adding a small quantity of phosphorus to the melt have been performed.

MCZ may be the future standard CZ technology since today’s approaches to solve the challenge of the 300 mm and later on also the 400 mm crystal diameter are based on this technology The method is the same as the CZ method except that it is carried out within a strong horizontal (HMCZ) or vertical (VMCZ) magnetic field. This serves to control the convection fluid flow, allowing e.g. with the HMCZ method to minimise the mixing between the liquid in the center of the bath with that at the edge.

This effectively creates a liquid silicon crucible around the central silicon bath, which can trap much of the oxygen and slow its migration into the crystal. Compared to the standard CZ a lower oxygen concentration can be obtained and the impurity distribution is more homogeneous.

This method offers also the possibility to produce detector grade silicon with a high oxygen concentration. Since the technology is still a very young one, it is hard to get such material with reproducible impurity concentrations on a commercial basis. However, a first test material of 4 KΩcm  p-type with an oxygen concentration of 7 - 8 l017 cm-3 and a carbon concentration below 2xl016 cm-3 was obtained.

With the CCZ method a continuous supply of molten polycrystalline silicon is achieved by using a double quartz crucible. In the first one the crystal is grown and in the second one, connected to the first one, a reservoir of molten silicon is kept, that can be refilled by new polysilicon during the growth process.

This allows for larger crystal length and improves the throughput and operational costs of the CZ grower. Furthermore the resulting single crystals have a uniform resistivity and oxygen concentration and identical thermal history. In combination with the magnetic field method the Continuous Magnetic Field Applied CZ technique (CMCZ) offers the possibility to grow long and large diameter CZ. However, silicon produced by this technology has so far not been used for radiation damage experiments.

Float-zone silicon is a high-purity alternative to crystals grown by the Czochralski process. The concentrations of light impurities, such as carbon and oxygen, are extremely low. Another light impurity,nitrogen, helps to control microdefects and also brings about an improvement in mechanical strength of thewafers, and is now being intentionally added during the growth stages.

The float Zone (FZ) method is based on the zone-melting principle and was invented by Theuerer in 1962. A schematic setup of the process is shown in Fig. 2.2. The production takes place under vacuum or in an inert gaseous atmosphere. The process starts with a high-purity polycrystalline rod and a monocrystalline seed crystal that are held face to face in a vertical position and are rotated. 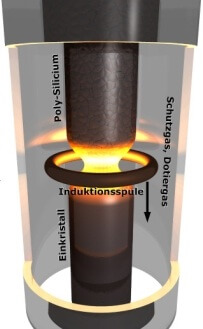 With a radio frequency field both are partially melted. The seed is brought up from below to make contact with the drop of melt formed at the tip of the poly rod. A necking process is carried out to establish a dislocation free crystal before the neck is allowed to increase in diameter to form a taper and reach the desired diameter for steady-state growth.

As the molten zone is moved along the polysilicon rod, the molten silicon solidifies into a single Crystal and, simultaneously, the material is purified.

Typical oxygen and carbon concentrations in FZ silicon are below 5 1015 cm-3. FZ crystals are doped by adding the doping gas phosphine (PH3) or diborane (B2H6) to the inert gas for n- and p-type, respectively. Unlike CZ growth, the silicon molten Zone is not in contact with any substances except ambient gas, which may only contain doping gas. Therefore FZ silicon can easily achieve much higher purity and higher resistivity.

Additionally multiple zone refining can be performed on a rod to further reduce the impurity concentrations. Once again the effective segregation coefficient k plays an important role. Boron, for example, has an equilibrium segregation coefficient of k0 = 0.8. In contrast to this phosphorus cannot only be segregated (k0 = 0.35) but also evaporates from the melt at a fairly high rate.

This is the reason why on the one hand it is easier to produce more homogeneous p-type FZ than n-type FZ and on the other hand high resistivity p-type silicon can only be obtained from polysilicon with low boron content. Dopants with a small k0 like Sn  can be introduced by pill doping  - holes are drilled into the ingot into which the dopant is incorporated - or by evaporating a dopant layer on the whole ingot before the float zoning process.