CERN: between God and science

CERN is the most famous laboratory in the world for Particle Physics. It is the place where the World Wide Web was invented and the Higgs boson discovered. CERN is simply the best place where scientists can carry out research and push our knowledge further beyond new horizons.

CERN was established in 1954, inspired by the dream of giving expression to the rising European spirit. This great research project was meant to overcome the divisions between the two big blocks, USA vs Soviet Union, stopping the diaspora of scientific minds that characterized the previous twenty years. Today, more than ten thousand people from eighty countries work at CERN: Iranians and Americans, Palestinians and Israelis, Pakistanis and Indians work side by side to probe the subatomic matter.

One hundred meters below their offices, protons run at an incredible energy of 14 trillion electron volts, accelerated by the Large Hadron Collider (LHC).
LHC has been conceived and build to address, and possibly solve, a number of open questions related to Fundamental Physics: where the masses of elementary particles come from (a problem largely solved by the discovery of the Higgs boson), what makes up the mysterious dark matter, which constitutes about 25 percent of the universe, and why there is such a big asymmetry between matter and antimatter.

LHC is the place where the coldest point and the hottest point of the universe meet up. While LHC is cooled down with superfluid helium at the temperature of about -271 degrees centigrade - a temperature very close to absolute zero – few meters away, in the centre of particle detectors, particles collide after being accelerated almost at the speed of light reaching temperatures a billion times higher than those in the center of the Sun.

Finding materials and equipment that withstand such extreme conditions is a constant challenge.
For this reason, “invent” is the most common word at CERN. Everything at CERN is made of unique pieces generally unavailable on the market. In some cases, pieces are handcrafted and shaped up like real artworks by talented artisans. LHC, and the other almost thirty experiments operating at CERN, are the result of a collective work exactly like it was for the Colosseum or the Florence cathedral. 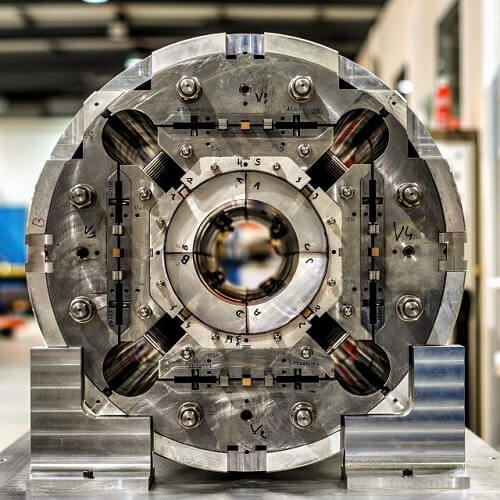 However, the journey which led to the discovery of the Higgs boson has been long and full of difficult moments which were overcome with courage, humility and determination. The Higgs Boson was not discovered in five minutes, but it was the result of twenty years of efforts.

Nevertheless, LHC has been a great success and we all are looking forward to hearing of new discoveries and new Physics, that today we can’t even imagine.

The issues still open in fundamental physics are numerous, crucial and fascinating, so the enthusiasm for the data coming from LHC is enormous.