Higgs Boson discovery. How the God Particle is changing our world

The Higgs boson is a massive scalar boson predicted by the Standard Model.

Theorized in 1964, a particle with the characteristics of the Higgs boson was observed in 4 July 2012. The ATLAS and CMS experiments at CERN's Large Hadron Collider announced they had each observed a new particle in the mass region around 126 GeV.

On 14 March 2013, a Higgs-type boson was tentatively confirmed to exist by experimental research at the Large Hadron Collider (LHC).
Scientists believe that the Higgs boson is the last discovered particle outlined by the Standard Model of particle physics, which explains the interaction of all subatomic particles.

After many years we finally understood why particles have mass, and this is due to their interactions with the Higgs Field. The more the particles interact, the heavier they became. For example photons do not interact at all with this field which is why light does not carry any mass.

You can imagine the Higgs Field like a group of journalists and the particle like a person supposes to pass through it. An unknown person will go through easily (low mass particle) while a celebrity will struggle a lot and will have to make a bigger effort to succeed (higher mass particle). 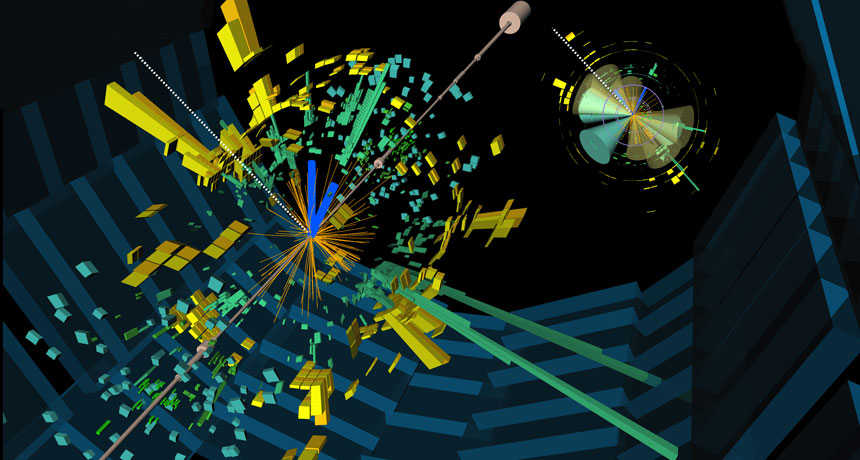 Despite this big discovery, are still many points not clear around the Higgs Field. First of all, why some particles interact more than others ??

The verdict will hinge on more detailed measurements of the particle’s properties, like its spin and how it decays relative to other particles. The Higgs boson is supposed to have no spin at all; it is the knuckleball of the subatomic world.

CERN’s collider, is now down for two years of repairs, but its teams have stockpiled their unanalyzed data, and look forward to the prospect of more years of high-energy collisions starting in 2015.

I forgot to say. No worries. The Higgs Boson is not going to destroy our world and universe :)

What do you think?