The minority carrier “lifetime” (τ) measures how long a carrier is likely to stay around for before recombining and is one of the most important parameters for the characterization of semiconductor wafers used in the preparation of power electronic devices and photovoltaic solar cells. Stating that "a silicon wafer has a long lifetime" usually means minority carriers generated in the bulk will persist for a long lifetime before recombining. 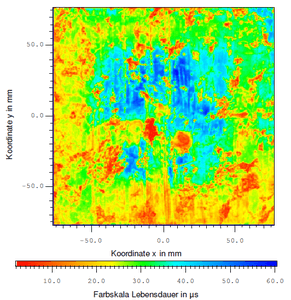 The lifetime is related to the recombination rate by:

In order to understand practical measurements of the lifetime it is, first of all, essential to realize that usually we measure relatively thin slices of material and, therefore, the recombination process don’t occur only in the bulk but we should expect that the surfaces of the wafer may play an important role in the global recombination processes that we are measuring. Electrons and holes can recombine at the surfaces of a silicon wafer, and the speed at which they do is characterized traditionally by a parameter called the surface recombination velocity, S.

The lifetime is quite unpredictable and difficult to control. It can vary by several orders of magnitude, from approximately 1 ns to 1 ms in common silicon solar cell materials. The highest value ever measured is 32ms, for undoped silicon, and the lowest 10-9 s, for heavily doped silicon. In the same way that the life expectancy is an indicator of the quality of life in a country, the lifetime says the quality of the silicon material. This quality depends, primarily, on the methods used to purify and grow crystalline silicon.

An electron directly combines with a hole in the conduction band and releases a photon;

The emitted photon has an energy similar to the band gap and is therefore only weakly absorbed such that it can exit the piece of semiconductor.

For an indirect bandgap semiconductor such as silicon τrad is very large and usually neglected.Recombination through defects, also called Shockley-Read-Hall or SRH recombination, does not occur in perfectly pure and undefected material. The two steps involved in SRH recombination are:

An electron (or hole) is trapped by an energy state in the forbidden region which is introduced through defects in the crystal lattice. These defects can either be unintentionally introduced or can have been deliberately added to the material, for example in doping the material;

If a hole (or an electron) moves up to the same energy state before the electron is thermally re-emitted into the conduction band, then it recombines.

The rate at which a carrier moves into the energy level in the forbidden gap depends on the distance of the introduced energy level from either of the band edges. Therefore, if an energy is introduced close to either band edge, recombination is less likely as the electron is likely to be re‑emitted to the conduction band edge rather than recombine with a hole which moves into the same energy state from the valence band. For this reason, energy levels near mid-gap are very effective for recombination. The effect of such recombination centres can be adequately described with the Shockley-Read-Hall model (Hall, 1952; Shockley and Read, 1952). For the common case that the recombination centre is located near the middle of the energy gap, it is possible to simplify the SRH expression for the minority carrier lifetime to show more clearly its dependence on carrier injection level:

The bulk lifetime for extrinsic silicon can be determined using semi-empirical models based on lifetime measurements of float-zone silicon with very low defect levels. The lifetime is dependent on the excess carriers and doped atoms concentrations. Most silicon wafers have higher levels of contaminants and so lower lifetimes than calculated here.

Let us consider a common case where the two surfaces of the wafer are identical and characterized by a certain surface recombination velocity S.  The effective lifetime can be written with the following expression:

where W is the thickness of the sample.

For a typical p-type 0.03 cm thick wafer, and a diffusion coefficient for electrons Dn = 27 cm2 s-1, the lifetime that can be expected for a non-passivated surface is τeff=2.8 ns. Nevertheless, the surface-limited lifetime can be even lower if the source of light is predominantly of short wavelength, because electrons that are photogenerated by visible or blue light (such as a white flash lamp) are very close to the surface and can diffuse to it almost instantaneously.